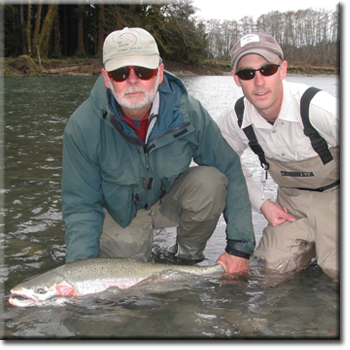 Posted January 12, 2019 by SteveBuckner in The Fish

Steelhead are the same species of fish as the Rainbow trout.The difference between a Steelhead and a Rainbow is that the Steelhead is anadromous (ocean going).Of the Pacific salmonids, the Steelhead is held in the highest esteem amongst fly anglers.This is because not only is the Steelhead an extremely good fighting fish but also because these fish are relatively few in number.Some fly fishermen refer to these fish as The Fish of a Thousand Casts because of the time it takes to hook one of these fish.

There are two main runs, the Winter Steelhead and the Summer Steelhead.Some river systems have both Winter and Summer run fish while other streams may have one or the other.On average, winter fish tend to be bigger than their summer relatives.

Steelhead and Rainbow trout are the same species but Rainbow are freshwater only, and steelhead are anadromous, or go to sea. Unlike most salmon, steelhead can survive spawning, and can spawn in multiple years.Life Cycle

Both Summer and Winter run steelhead spawn in the spring.Like their name suggests, Summer Steelhead begin migrating to their natal streams during the Summer months.This migration may take place as early as May on some rivers and may last until late fall/early winter.Summer fish generally travel much further to spawn than the Winter run fish.Likewise, Winter Steelhead begin their migration early winter with some fish continuing to migrate well into spring.Unlike the other Pacific Salmonids, not including the Sea Run Cutthroat, steelhead are not pre-programmed to die after spawning and may live to spawn multiple times. After the eggs have been deposited in the spring,the fry emerge in summer andmay spend the next 1 to 3 years in fresh water prior to migrating to the ocean.

It is common on many northwest streams to find fresh steelhead year-round.Generally speaking, the winter run hatchery fish become available from late November through January.From lateJanuary through April is the best time to target wild winter steelhead.Summer fish begin entering fresh water in May with many runs peaking in the August/September time frame.

While it is possible to be successful using a variety of techniques, it is important to remember that winter fish tend to be less responsive than summer fish and so many fly fisherman employ techniques similar to nymph fishing, i.e., using floating lines, 9 ft. leaders and heavily weighted flies and/or strike indicators while chasing winter run steelhead.Winter steelhead are less prone to chase a fly due to cold water temperatures during the winter and early spring months.

When warmer temperatures begin to arrive during the spring and summer months, it is possible to utilize various sink tips to put the fly within the strike zone to pursue late winter steelhead and/or summer steelhead.Most northwest fly fisherman will utilize the wet fly swing by casting down stream at approximately 45 degrees and allowing the fly to slowly sweep across the current until the fly hangs directly below the fly fisherman.The fisherman takes a step or two downstream and continues this process.