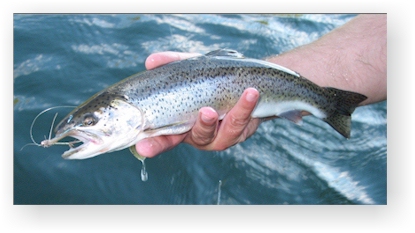 Posted April 3, 2019 by SteveBuckner in The Fish

The Sea-Run Cuttthroat is known for its aggressive behavior towards a properly presented fly. Generally, these fish run between 12-18 inches, but occasionally much larger fish are caught. Although they are usually relatively small when compared with their larger cousins, pacific salmon, being a sea run fish makes them unusually strong for their size. The sides of these fish are a beautiful silver color and they also display the orange “Cut” on the underside of their mouth which gives this fish its name. There are 13 subspecies of Cutthroat native North America and this is the only species that travels to the ocean. These are great fish for the novice as well as the experienced fly fisherman. These fish are like little mini-steelhead!

Sea-run cutthroat begin migrating from the estuaries to their natal streams in late fall. They may spawn anytime from early winter through early summer. After the eggs emerge, they may spend from 2-3 years in fresh water prior to migrating to the estuaries. Sea-runs don’t generally head out into the open ocean like the other pacific salmonids do, but instead, prefer to stay within relative proximity to their natal streams. Like steelhead, Sea-run cutthroat have the ability to spawn multiple times without dieing.

Within a given population of Sea-runs, some adult fish will migrate to the estuaries while others will be resident within their natal streams. Generally however, the best fishing for them in fresh water late fall through spring. Just as some populations of Sea-runs may stay in fresh water, their are also populations of trout which spend the majority of their life in the estuaries, making them a quarry to pursue nearly year round.

Sea-runs are generally not shy. As with other anadromous fish however, they may be constantly migrating so it pays to not spend too much time in one spot if you haven’t started catching/seeing fish. These fish will often rise to a dry fly in estuaries although no hatch may be present. The same holds true for fresh water.

If in the estuaries, look for oyster beds as these trout are often found within close proximity. A standard 5 wt. rod with a floating line and a variety of standard trout flies is often all that is needed to entice these fish. In fresh water they are usually found in faster water during the hot summer months.