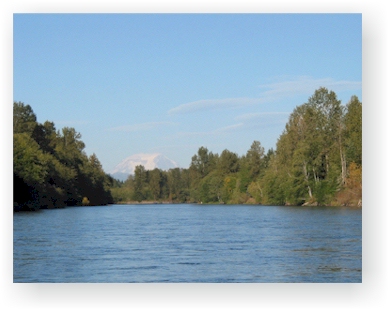 Posted June 27, 2019 by SteveBuckner in Articles

There is something about a river that has fresh Steelhead, Salmon, and Cutthroat trout every month of the year that appeals to all fly fisherman.  The sound of LARGE fish rolling and jumping makes the adrenaline flow.  Twelve months of the year there is a genuine possibility of hooking into a fish 15 lbs. or greater and not a day goes by that a lucky few have that experience.  In today’s world, it is rare to find a river that is remote enough and yet close enough to civilization that it can be reached within a 2 hour drive from 2 major cities.  The Cowlitz River in Southwest Washington is such a river.

The Cowlitz River is a big river by any standard.  In many places the river is over 100 yards wide.  It begins it’s journey to the Pacific Ocean on the slopes of Mt. Rainier, one of the highest peaks in the lower 48 states at 14,410 feet above sea level.  It flows nearly 100 miles from the glacial fields to the confluence with the mighty Columbia River near Longview Washington.  Along the way, many small streams join the river providing excellent habitat for spawning native Salmon, Steelhead and Sea-Run Cutthroat trout.

Although there are a growing number of fly fishermen becoming aware of it’s vast potential, few fly fishermen are encountered along its journey to the sea.  This is probably because much of the surrounding land is private and a boat is required for good access.  This river sits slightly far enough south of Seattle and far enough north of Portland that it doesn’t receive the pressure of many more “well known” rivers.  For the fly fisherman, this translates into a river that is waiting to be discovered.  Long, gently sloping gravel bars make for ideal fly fishing opportunities with both single and double handed rods.

There are two hatcheries in the lower stretches that do attract many during the weekends and during the peak runs.  Amazingly however, the gear guides and crowds really only target approximately the mile of river below the Blue Creek hatchery and the few hundred yards below the salmon hatchery at the Barrier dam.  This leaves over 50 miles of river left to the adventurous angler.  If you’re looking to find yourself in a remote location fishing on your own gravel bar this river is for you.

A very large part of what makes a quality fishing experience is being able to fish a river that still has abundant wildlife, both below and above water.  A day on this water provides wonderful opportunities to observe nature at its finest.  Besides the aforementioned species of fish, River Otters, nesting Bald Eagles, Cooper’s Hawks, Peregrine Falcons, Osprey, Great Blue Herons, Black Tail Deer, Canada Geese and Mergansers all can be seen on this river all within a relatively close proximity to two large metropolitan cities. Beautiful views of Mt. Rainier and Mt. St. Helen’s are all part of the journey on the Cowlitz..

Guide for Fishing © 2022 All Rights Reserved.