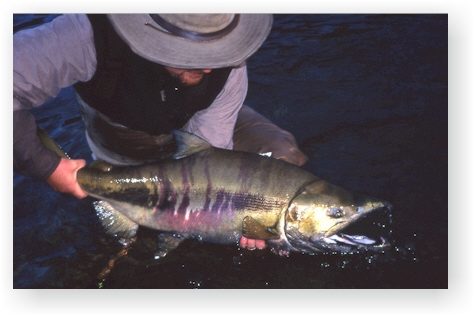 Posted September 23, 2019 by SteveBuckner in The Fish

Chum, or Dog salmon as they are often called, are the most abundant wild salmon in Washington state.  They get the name Dog salmon due to the pronounced canine like teeth of the male adult fish.  Chum salmon have gained popularity with fly fisherman due to their relative abundance and aggressiveness.

Chum salmon enter their native rivers mid to late fall.  They tend to spawn fairly low in the river system and as a result, soon deteriorate after entering fresh water.  These salmon congregate and lay their eggs during this time and the fry hatch the following spring and migrate out to sea.  The fry tend to move to the estuaries fairly quickly after emerging where they’ll spend a few months prior to migrating to the ocean.

Chum start gathering in the estuaries in late October.  When the fall rains begin to raise the water levels in the streams the salmon take advantage of the higher water and begin their migration up river slightly thereafter.  Late October through December are the prime months to target these fish in fresh water.  Due to the fact that these fish turn so quickly, the lower in a river system they can be targeted the better.

Chum salmon are aggressive to the properly presented fly.  These fish, like most salmon, will travel in groups and one should concentrate their efforts in places where fish can be readily seen.  These fish will sometimes rise to take flies fished on the surface.  Other times, is is necessary to use a sink tip to present the fly at the correct level.  One thing is for certain, once you have hooked one of these fish you’re in for a battle.  These fish will test your knots, leaders and equipment.

Guide for Fishing © 2020 All Rights Reserved.