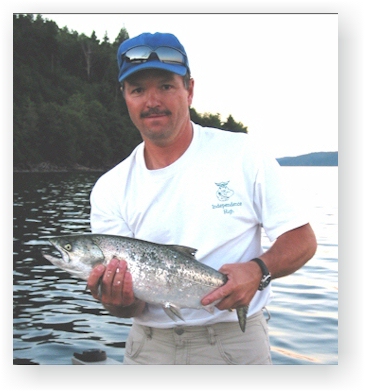 Chinook, or King salmon as they are often called, are the largest of the pacific salmonids.In Canada, Chinook salmon may also be referred to as “Springs” and/or Tyee. On the Columbia river, two additional names are the “Tule” and the Up-River Bright.These names refer to where this salmon spawns.Chinook are easily identified by the black mouth and gums.The average weight of a chinook is between 10 and 15 lbs., although fish over 100 lbs. have been caught.

Spawning takes place from August through December with the fry emerging in the spring where they may spend from a few days to a couple of months and/or up to a year depending upon location prior to migrating to the salt.Life spans vary from 3 to 8 years with 4 being the most common.The longer the time spent in the salt relates to fish of larger size.

Depending upon geographic location, chinook may enter fresh water and begin their migration to their spawning grounds almost year round.The Columbia River has 3 distinct runs, a spring run which begins in late February or early March, a summer run which may begin in June, and a fall run which usually begins in early August.The earlier runs migrate further to their spawning grounds and are highly sought after due to their strength and flavor.Coastal chinook enter the river systems in late September through November with some late fish showing up in late December and January.

Generally speaking, Chinook are best pursued with 9-12 weight rods with heavy sink tips as they often hug the bottom of the streams they inhabit.Although Chinook can be found in slack water, many fish will also lie in the depressions of the down-river side of gravel bars in relatively heavy current.Top fly choices include various color and weight combinations of wooly buggers and girdle bugs.Long, slow retrieves are generally used to keep the fly in the strike zone as long as possible.The take is often subtle, but once hooked, you’re in for a battle.

Guide for Fishing © 2022 All Rights Reserved.