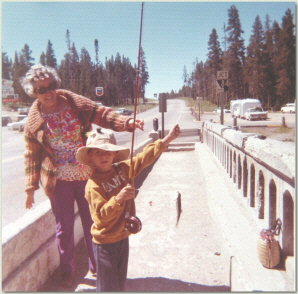 I began fishing at the age of 7 and caught my first fish at Mac’s Inn in Island Park on the Henry’s Fork of the Snake River, Idaho, using a fiberglass fly rod and fishing a worm. That was 1972 and I’ve been crazy about fishing ever since. My grandfather was also a fly fisherman and some of my earliest memories were that of wrapping bits of feather from his fly tying kit around a hook. I took my first fly tying class at the age of 15 from a math teacher of mine, Mr. Bradley. I became a strict disciple of the fly rod in the late 1980’s.

I’ve been fortunate to pursue and catch fish with flies on many of the great Trout, Salmon, and Steelhead rivers of the West, Pacific Northwest, British Columbia, and Alaska. Besides fishing on my own, I’ve also guided fly fisherman in Alaska, Washington, and Oregon for all 5 species of Pacific Salmon, Steelhead, Sea-run Cutthroat, Rainbow Trout, Dolly Varden, Grayling and Pike.

Between 1982 and 1999, besides fly fishing, I was actively involved with the sport of falconry and held a master’s license. Besides training my own falcons, during much of that same timeframe, I also worked at the Tracy Aviary in Salt Lake City with Steve Chindgren and trained many species of birds for “Tracy Aviary’s Free Fly Bird Show”. Through those experiences at the aviary, I had the great pleasure of meeting some prominent people in the bird training industry, one of them was doing a benefit with Jim Fowler of “Mutual of Omaha’s Wild Kingdom”. Another was meeting Steve Martin (not the comedian) but a prominent bird training specialist for SeaWorld. For 17 years of my life I enjoyed flying and hunting my falcons on ducks, pheasants, and grouse in Utah, Wyoming, and Idaho during the winter months in some of the last truly wild places. Many of those places have now been tranformed into subdivisions. From late spring through summer, I spent my time exploring numerous river systems in Utah, Wyoming, Idaho, and Montana. I graduated with a B.S. degree in Applied Physics from the University of Utah in 1994.

I currently live on the banks of the Cowlitz river in Southwest Washington State and guide on the top producing rivers of Washington and Alaska. Some of the waters that I guide on include the Cowlitz, the rivers of the Olympic Peninsula, Kalama, Alagnak (and many other rivers within Katmai National Park), and some others here in Washington State that I don’t like to mention so that they are kept as pristine as can be. Some of the best Steelhead, Sea-run Cutthroat, and Salmon fishing available can be found here. The majority of the rivers that I guide on are within a relatively short drive from Portland, Oregon and Seattle, Washington. If business or pleasure brings you out to either of these cities you could easily slip out for a day or two of fishing.

Although I still like to catch trout, nothing excites me more than chasing and catching big ocean going fish such as Steelhead, Salmon, and Sea-run Cutthroat, fish that really know how to put on a fight. Many fly fisherman may not know that Pacific salmon will readily take flies when given the right opportunity. As I’ve traveled around the Pacific Northwest, seldom have I seen many who pursue Pacific Salmonids with flies. It was this little known fact that has compelled me to offer guided fly-fishing opportunities to those who would like to try their hand at what I consider the most fun that can be had on a fly rod.

The United States Coast Guard requires a Captain’s license to guide people for hire when using a motorized vessel on navigable water. It is just one more assurance to you that I have spent a considerable amount of time on the water. I also have American Red Cross First Aid and CPR certifications.